As for the maximum extrusion capacity aspect: 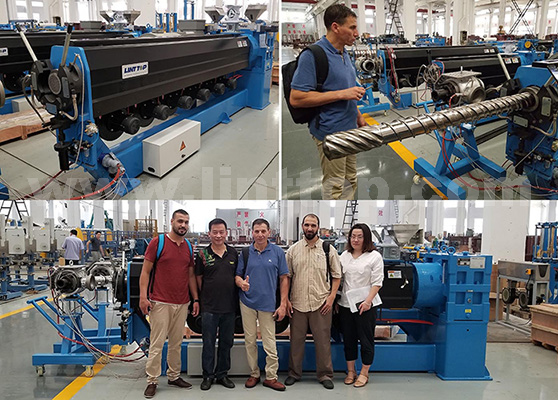 (The Inspection of Whole Extrusion Line)

The production line is equipped with 3 Sicora laser diameter gauges which are placed at the 120 filling, hot end 120 extruder and the finished product. In addition, the middle one is involved in the feedback control.

Our Algerian customers express their satisfaction during the inspection process and increase their cooperation confidence with LINTTOP. Now we are working on the shipment.

At Lint Top, work is performed in a highly collaborative manner.With great sales performance, our employees connect with customers all around the world. Lint Top can help you in wire and cable solution, including but not limited to the following products: Wire drawing, stranding machines, enameling machine, HV test equipment, pay-off&take-up, reels and so on. Learn more about Lint Top’s creative solutions to the world’s problems at www.linttop.com or on Twitter @cablelinttop or on Facebook @Lint Top.